Printed arts programs built the foundation of Encore and have been our flagship product for 50 years. Personally handed to attendees at each performance, our printed programs offer readers high-quality and aesthetically pleasing souvenirs. Encore programs provide meaningful and essential information regarding the organization, performers, and crew, to create a unique connection between the patron and the performance.

We partner directly with each organization to create a custom book that is representative of each organizations’ brand, personality and content. In addition, we solicit and procure like-minded advertising to help to offset the costs of printing and distribution.

Browse current publications below and contact us to request more information.

Encore+ is a digital program platform designed to offer your audiences the same informational and engaging program—digitally. Your custom Encore+ program hub will ensure an authentic theatre-going experience with a safe and contactless alternative.

Built as a mobile-first, progressive app, Encore+ can seamlessly integrate your content, assets, or easily link to your social channels, websites and other media to keep audiences engaged before and after each performance.

Fully customizable platform Encore+ is a flexible and custom-built option that is built to showcase your brand, content, images and more.

Designed for mobile Easily accessible via link, text message or custom QR code that can be delivered to your audience in a multitude of ways.

Interaction is measurable Analytics can help your organization find out more about your audience while providing relevant content.

Cost effective Production and platform hosting costs are considerably less than printing programs and costs can be offset by revenue from our wide network of advertisers.

Time efficient Without the need to send to a printer and ship to your destination, an Encore+ program can be created in a much shorter timeline.

Digital and print together Use Encore+ as an alternative or an enhancement to your printed program to offer rich and expanded media content.

Simple and safe to use Our mission is to make it easy and safe for all patrons to enjoy a program—Encore+ does not require a patron to pick-up a printed program or download an app to view each program. 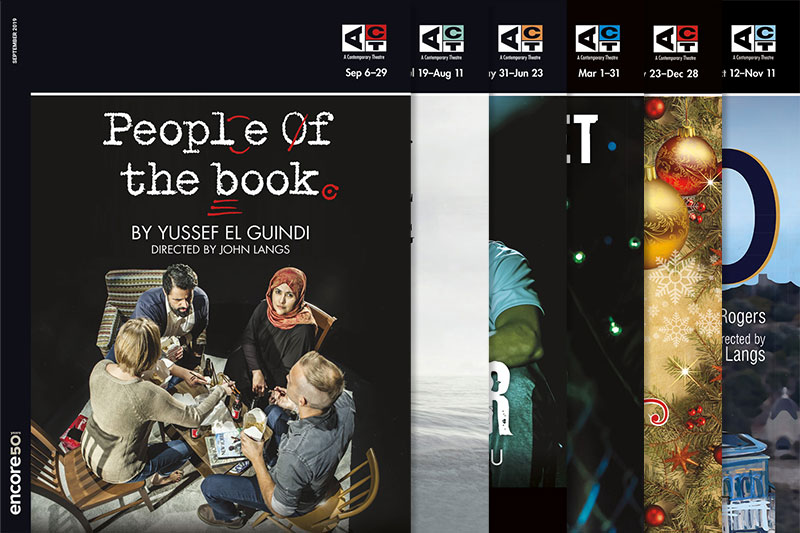 Founded in 1965, A Contemporary Theatre (ACT) is dedicated to producing relevant works on contemporary themes, nurturing artists and collaborating with promising playwrights and local performing artists working in a variety of media. They have multiple initiatives to engage audiences, develop new works and keep the arts accessible; ACT’s Mainstage has presented many world, American and West Coast premieres. 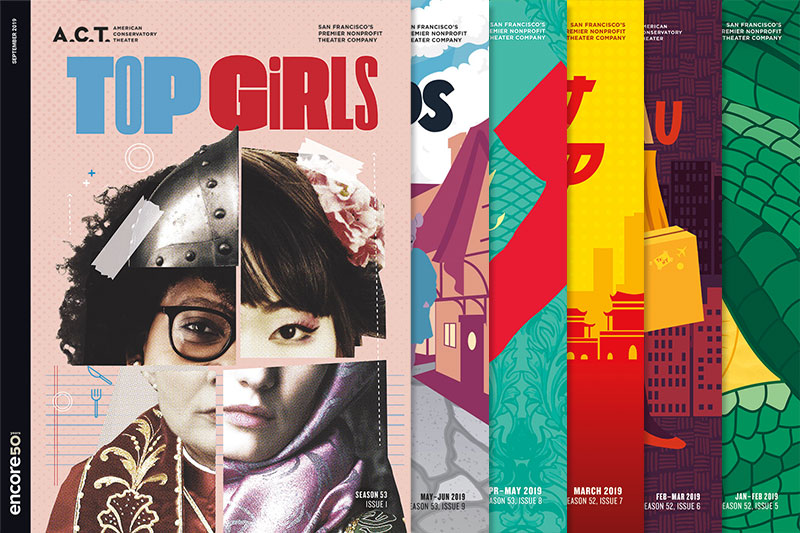 Since 1965, American Conservatory Theater (A.C.T.) has nurtured the art of live theatre through dynamic productions, intensive actor training in its Conservatory and an ongoing engagement with its community. Today, A.C.T.’s performance, education and outreach programs annually reach more than 250,000 people in the Bay Area at the Geary and Strand Theatres. 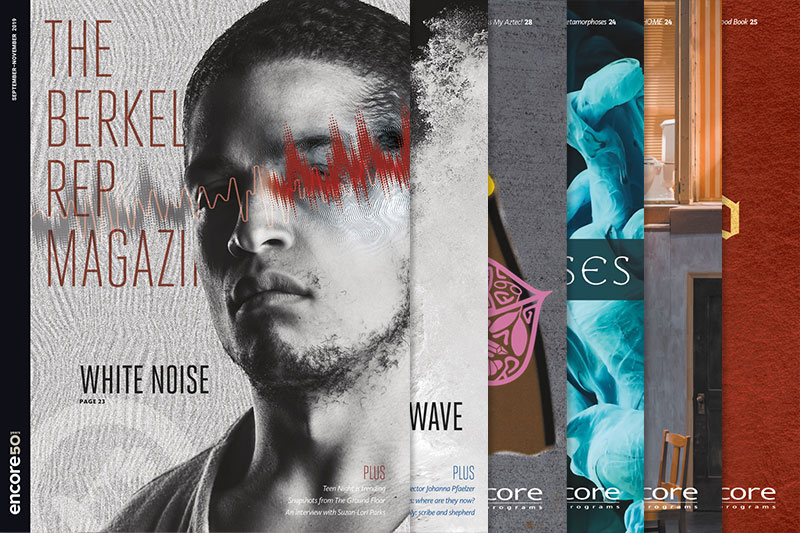 Berkeley Rep has grown from a storefront stage to an international leader in innovative theatre, receiving the Tony Award for Outstanding Regional Theatre in 1997. Known for its ambition, relevance and excellence, as well as its adventurous audience, the nonprofit has provided a welcoming home for emerging and established artists since 1968. Since its founding, over 5.5 million people have enjoyed nearly 500 shows at Berkeley Rep, which have gone on to win a host of national awards. 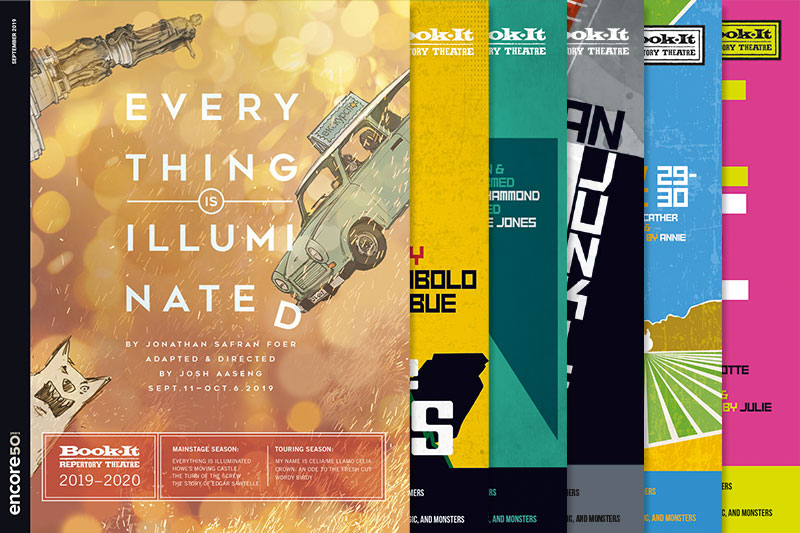 Book-It was founded in 1986 by a group of theatre artists who love to read and are passionate about literacy. Since then, Book-It has produced over 100 world premiere adaptations of literature, many of which are classics of Western literature’s canon. Support from Corporate Council for the Arts (now ArtsFund), Theatre Puget Sound and Seattle Center enabled this thriving company to move to The Armory at Seattle Center in 2000. 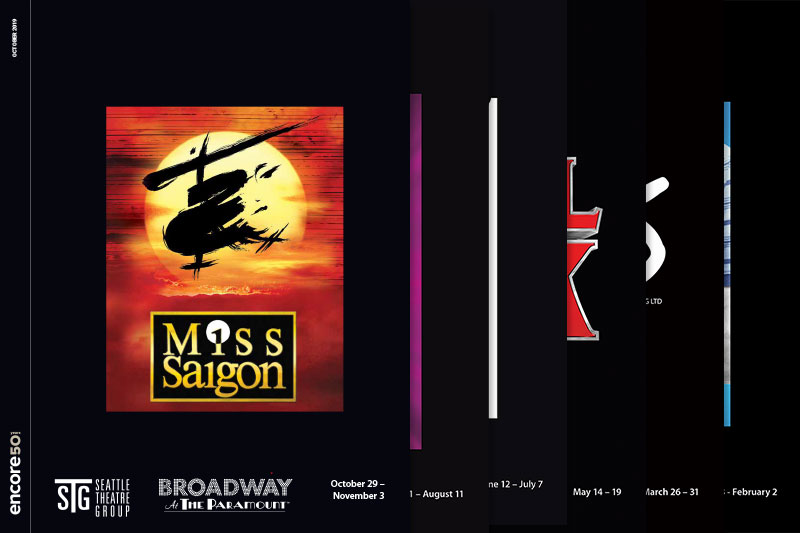 Broadway at The Paramount

Working with Broadway Across America, Broadway at The Paramount brings the lavish and acclaimed musicals from Broadway to Seattle’s own Paramount Theatre in nine shows throughout the year, with some attracting audiences of 100,000 throughout their run. 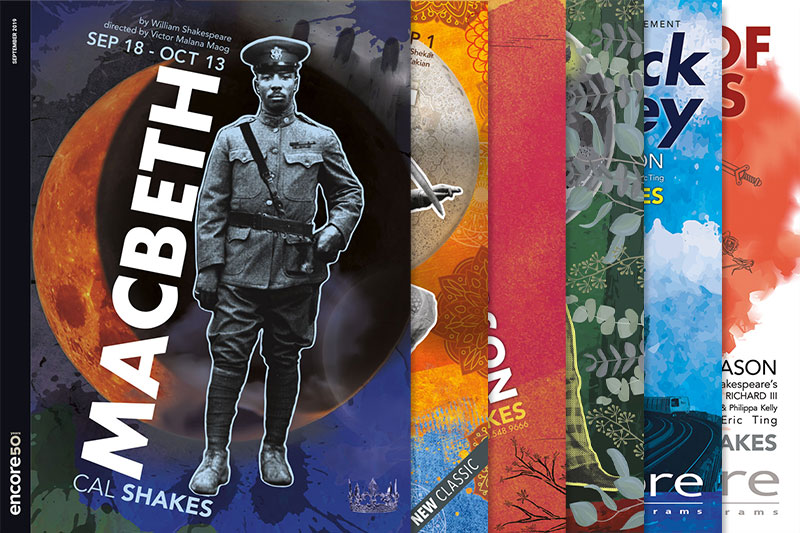 California Shakespeare Theater (Cal Shakes) redefines classical theatre for the 21st century, making works of extraordinary artistry that engage with our contemporary moment. Over four decades, Cal Shakes has become a cornerstone of Bay Area’s summer theatre, producing works from the Shakespeare canon and beyond, including new classics that expand and reframe the concept and ownership of “classic theatre.” 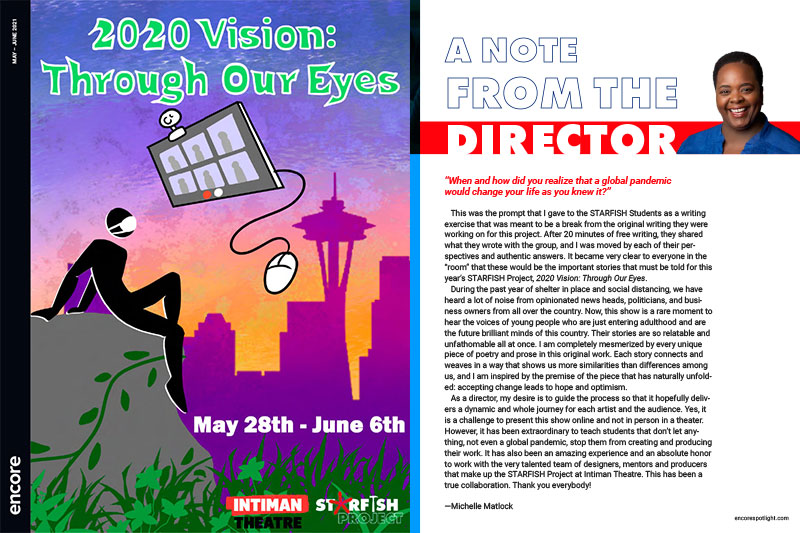 Since its founding in 1972, Intiman Theatre has presented over 240 productions to Seattle audiences and won the 2006 Tony Award for Outstanding Regional Theatre. Today, Intiman continues to produce work that is surprising, relevant and encourages conversation, activism and a personal connection between the theatre and its audiences. Intiman supports diverse voices and unique collaborations that allow audiences to experience worlds that are different from their own.
Program Archive 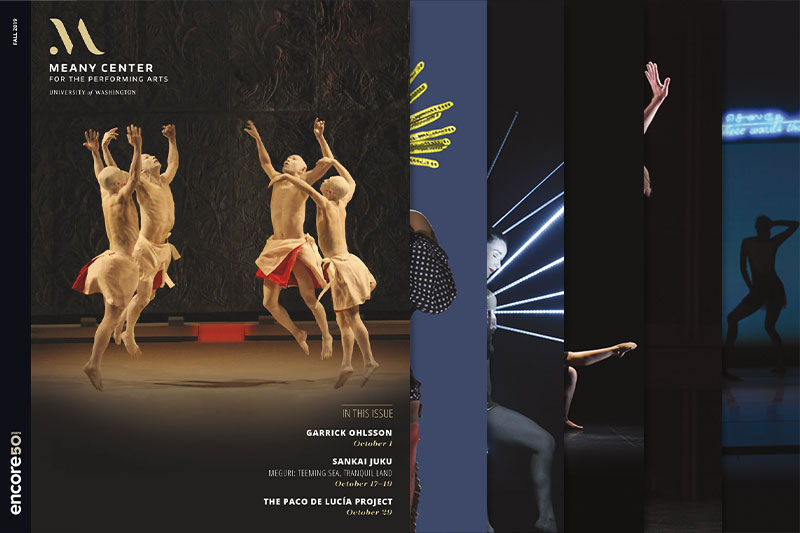 Meany Center for the Performing Arts

University of Washington’s Meany Center for the Performing Arts fosters innovative performances that advance public engagement, cultural exchange and learning. Meany Center provides opportunities for diverse artists, community, students and faculty to connect in the discovery and exploration of the arts to create positive change in the world. Performances by world-renowned artists take place in the 1,200 seat Meany Hall, acclaimed for its acoustics. 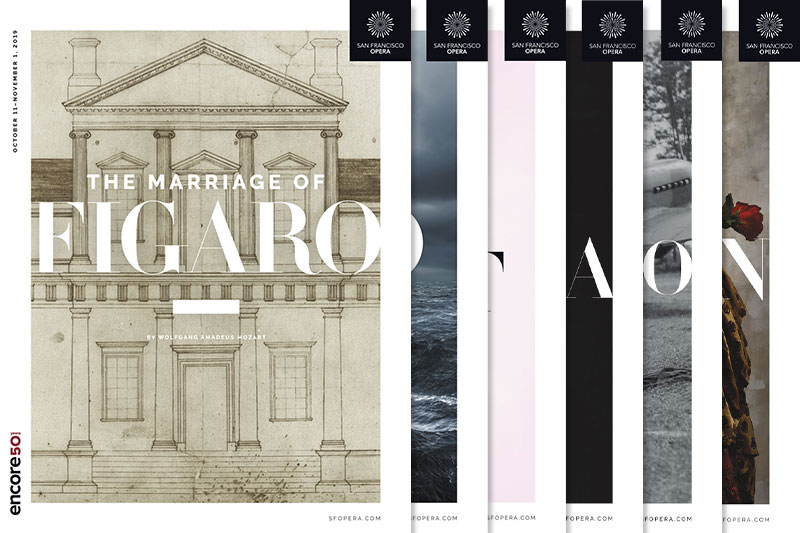 San Francisco Opera, one of the world’s leading opera companies for more than 90 years, is synonymous with what the Bay Area is known for—entrepreneurship, innovation and community involvement. The War Memorial Opera House has been the Opera’s home since 1932 where they continue to commission numerous world premieres and train some of opera’s greatest young artists. 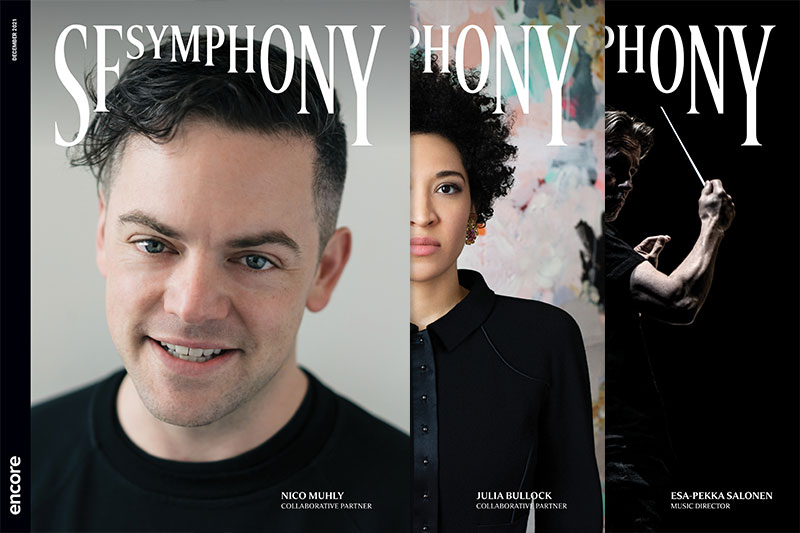 The San Francisco Symphony, founded in 1908, sets the highest possible standard for excellence in musical performance at home and around the world; enriches, serves, and shapes cultural life throughout the spectrum of Bay Area communities; maintains financial stability; and gains public recognition as a means of ensuring its ability to fulfill its mission. The San Francisco Symphony reaches 450,000 audiences member through concerts every year.
Program Archive 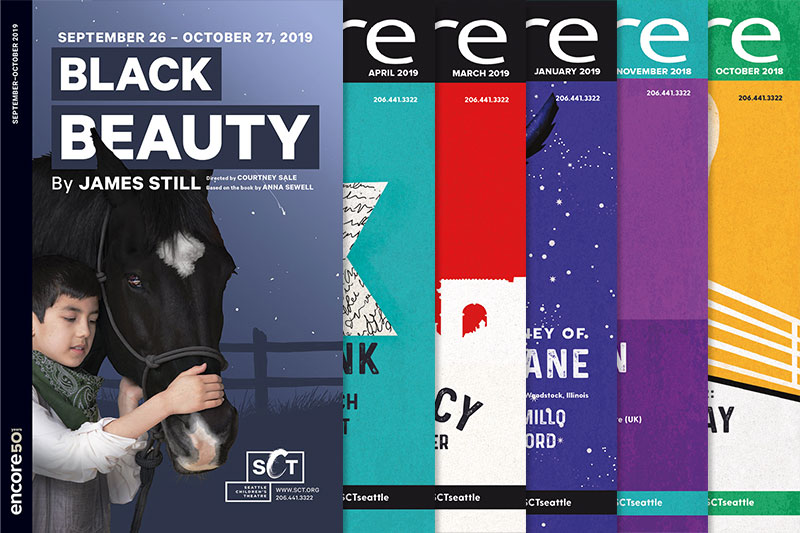 One of the most prominent theatres for young audiences in the country, Seattle Children’s Theatre (SCT) is internationally recognized as a leading producer of professional theatre, educational programs and new works. At the close of its 44th season in 2018, SCT has produced 263 plays, 113 of which were world premieres, entertaining, inspiring and educating over 4 million children. 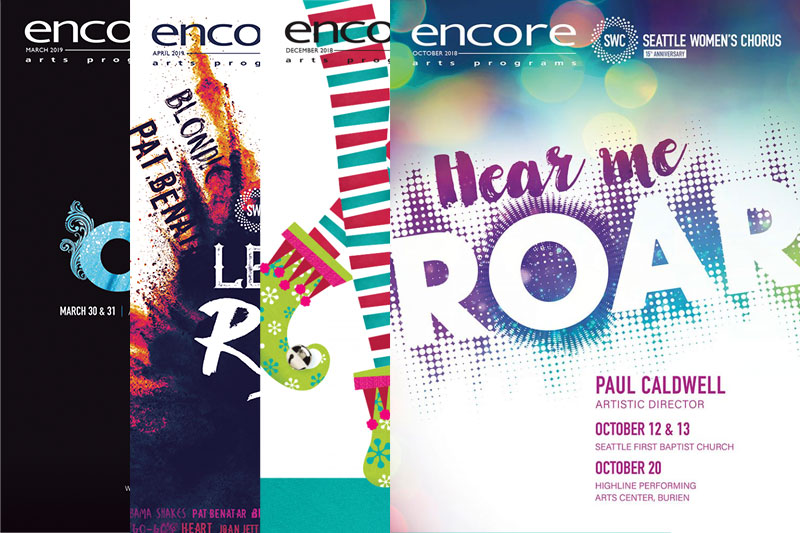 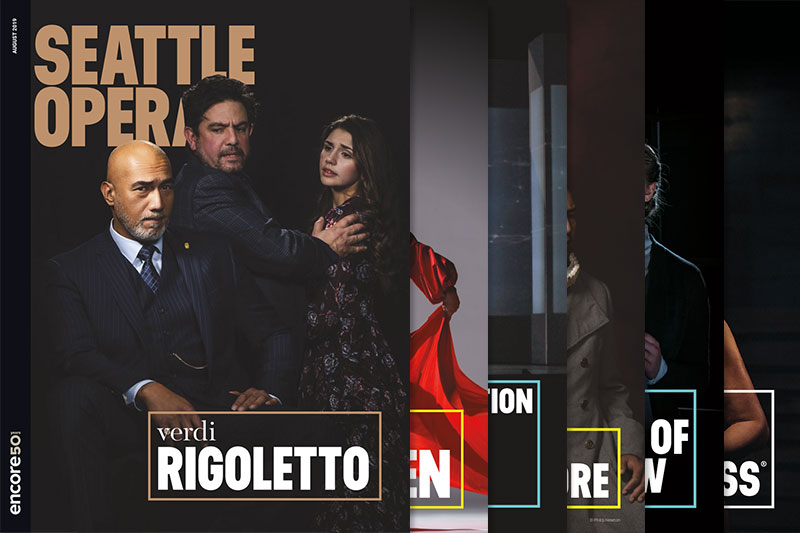 Founded in 1963, Seattle Opera is recognized internationally for the quality of its productions. The company is committed to advancing the cultural life in the Pacific Northwest with performances of the highest caliber through innovative education and community programs. Each year, more than 95,000 people attend Seattle Opera performances. 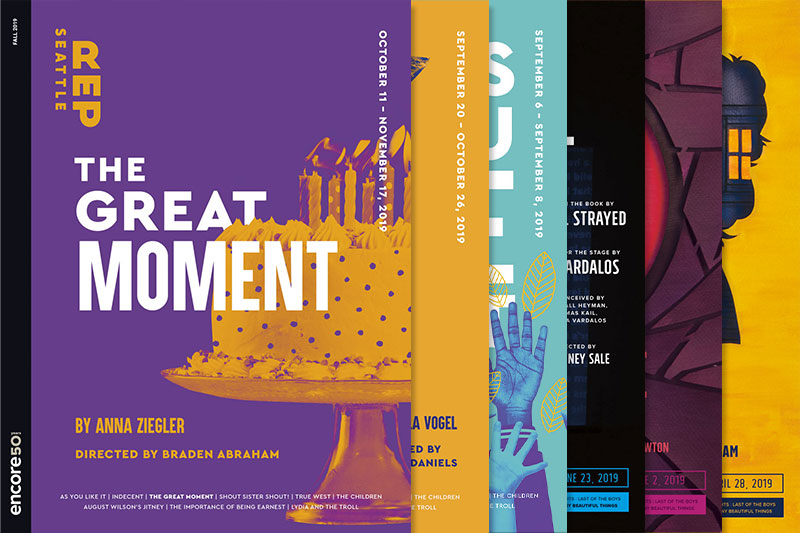 From its 1963 inception through today, Seattle Repertory Theatre has been a vital source for creative thought and conversation. One of the largest and most renowned regional theatres in the country, Seattle Rep produces a mix of classics, recent Broadway hits and contemporary works, receiving the Tony Award for Outstanding Regional Theatre in 1990. 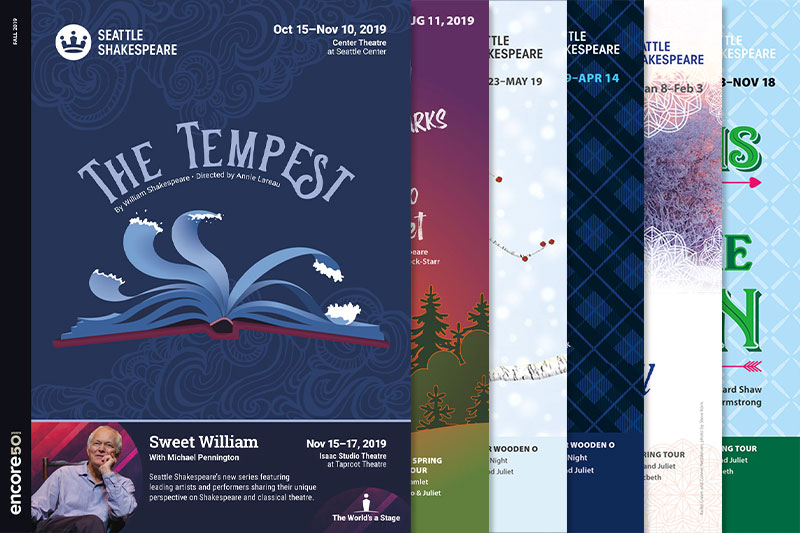 Seattle Shakespeare Company is Puget Sound’s year-round, professional, classical theatre. The company’s success stems from a deep belief in the power and vibrancy of the time-tested words and ideas of classical playwrights along with a commitment to artistic excellence. Their combined programs—indoor and outdoor productions, regional tours and educational programs—reach across barriers of income, geography and education to bring classical theatre to Washington. 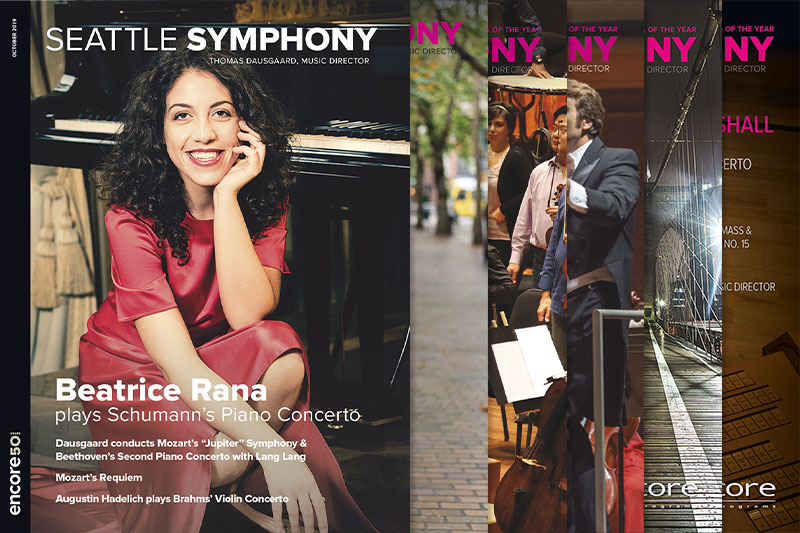 Voted 2018 Orchestra of the Year by Gramophone Classical Music Awards, the Seattle Symphony is one of America’s leading symphony orchestras and is internationally acclaimed for its innovative programming and extensive recording history. The Grammy-winning Symphony is enjoyed by more than 500,000 people each year through live performances. The Symphony performs at S. Mark Taper Auditorium, one of two acoustically state-of-the-art venues at Benaroya Hall. 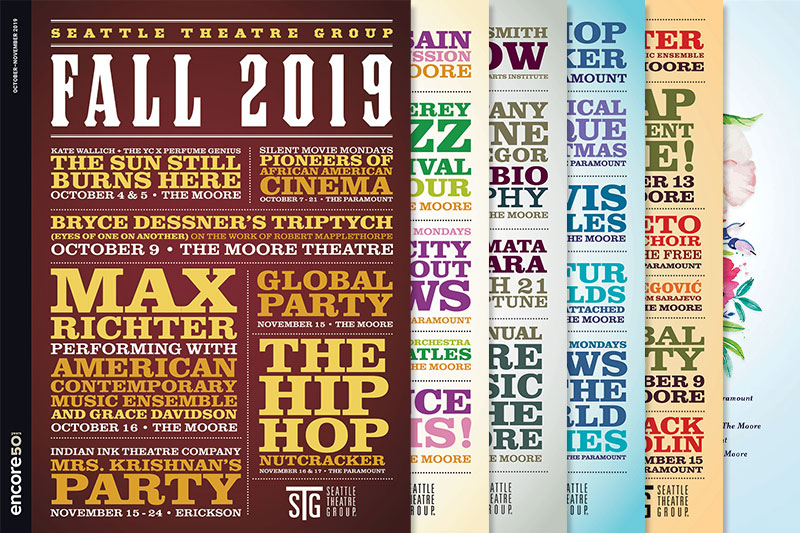 Seattle Theatre Group (STG) is a non-profit organization which presents more than 400 shows annually, most taking place at The Paramount, The Moore and The Neptune. As steward of these historic venues, STG is focused on making them accessible to all artists and audiences. With a mission to make diverse performing arts and education an integral part of the region’s rich cultural identity, STG’s shows are top quality and pull audiences from across the region. 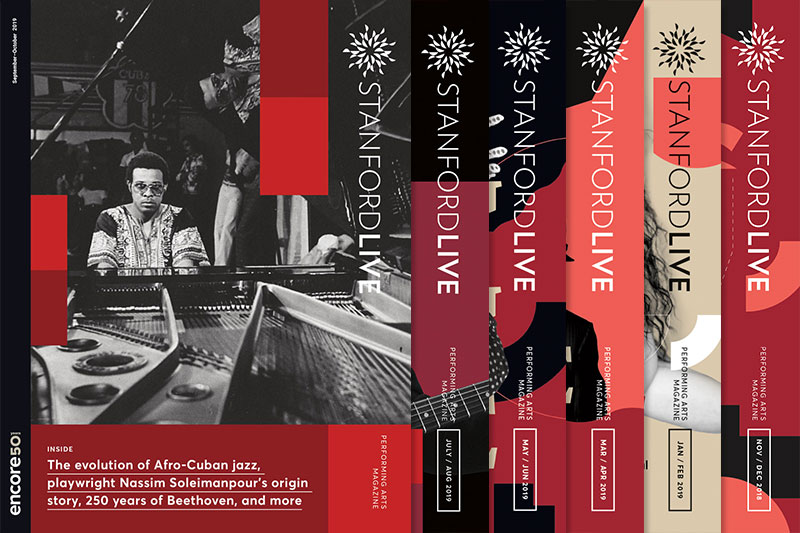 Stanford Live presents the finest in performance from around the world, fosters a vibrant learning community and provides distinctive experiences through the performing arts. Stanford Live is simultaneously a public square, a sanctuary and a lab, drawing on the breadth and depth of Stanford University to connect its more than 100 performances each season to the significant issues, ideas and discoveries of our time. 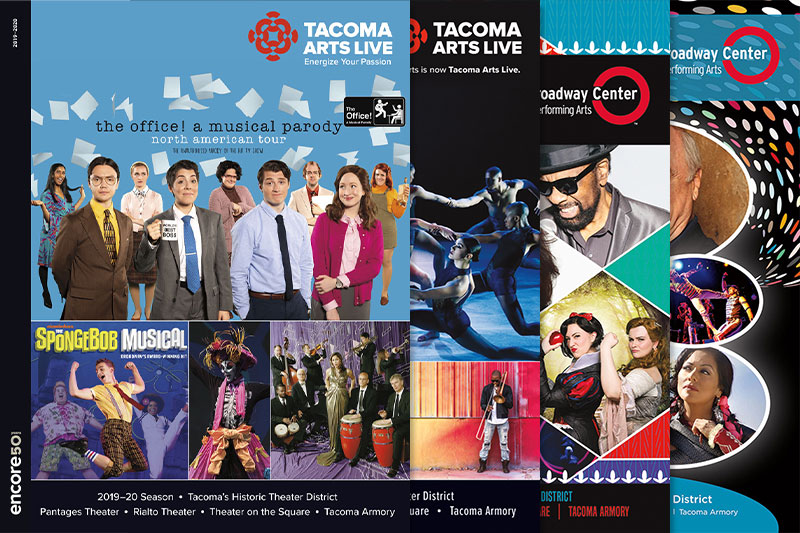 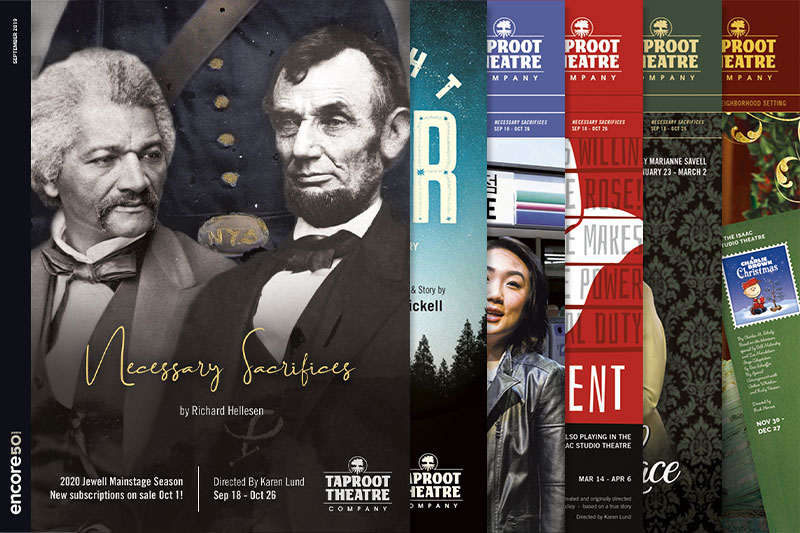 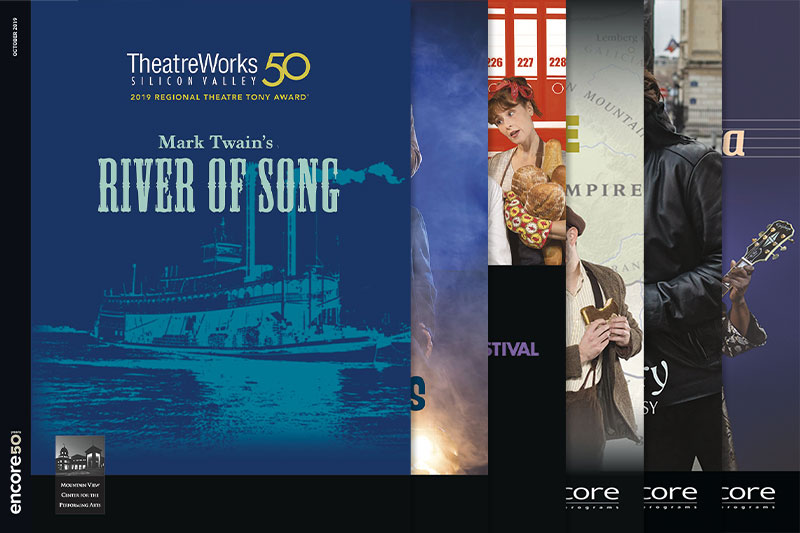 Over the course of 47 years, TheatreWorks has evolved from humble beginnings to become one of America’s outstanding professional theatres and the third largest repertory theatre in the Bay Area. Chartered by the City of Palo Alto in 1970 to create a performance company that reflected the concerns and diversity of the community, TheatreWorks celebrates the human spirit through innovative productions, new works and education programs. 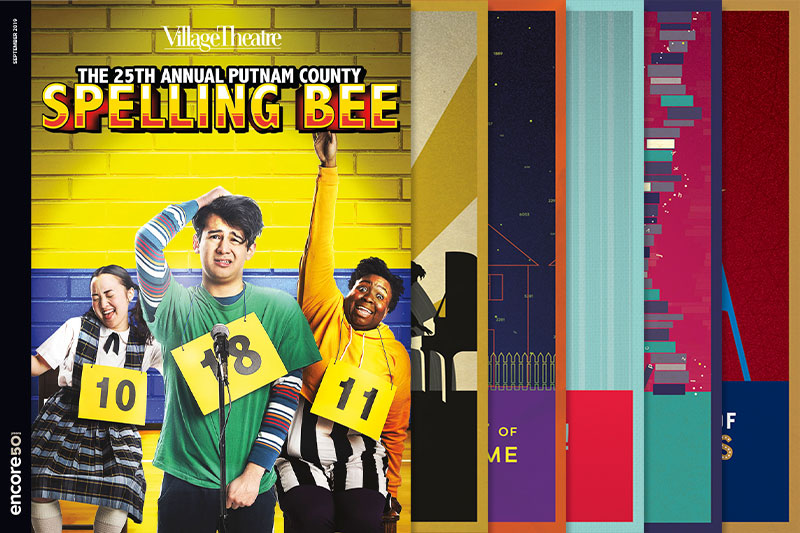 Based in Issaquah, with performances also in Everett, Village Theatre has been a leading producer of musical theatre in the Pacific Northwest since 1979. Nationally recognized for its contribution to the development of new musicals, Village Theatre is one of the region’s best-attended professional theatres, with over 20,000 subscribers. 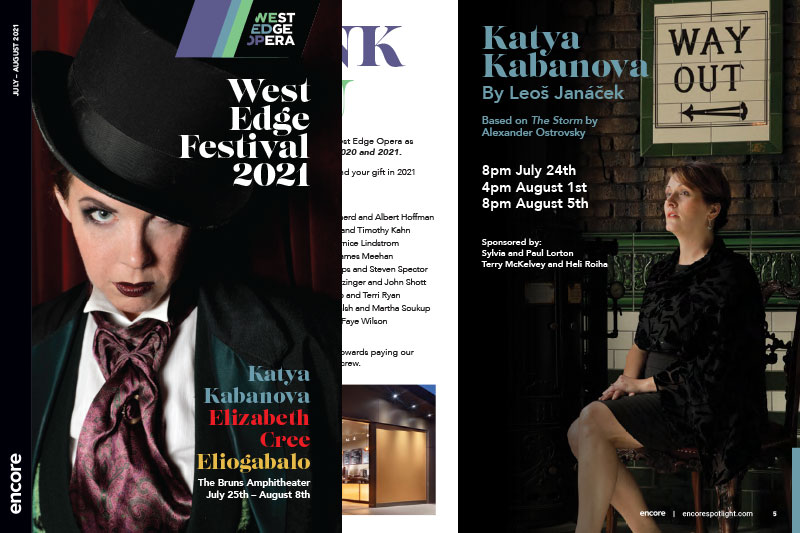 Custom publishing is just that: custom. Encore’s custom publishing department produces publications for organizations and special events, including guides, catalogs, magazines and newsletters. Our clients include Seattle Art Dealers Association (SADA), Seattle International Film Festival (SIFF), Seattle Out & Proud, and Seafair. We partner closely with our clients to build a publication to suit their needs and resonate with their audience, while ensuring it is one they are proud to share.

Browse current publications below and contact us to request more information. 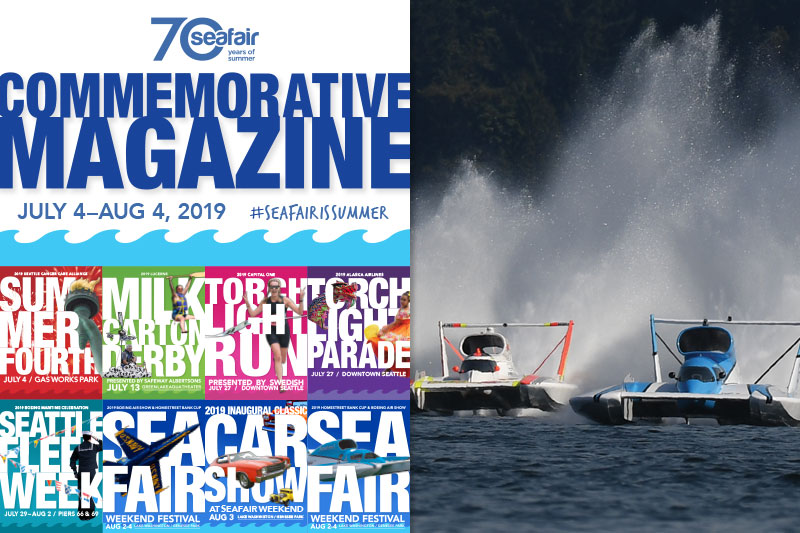 Reach thousands as they gather to celebrate Seattle’s summer across the many Seafair events and festivals. 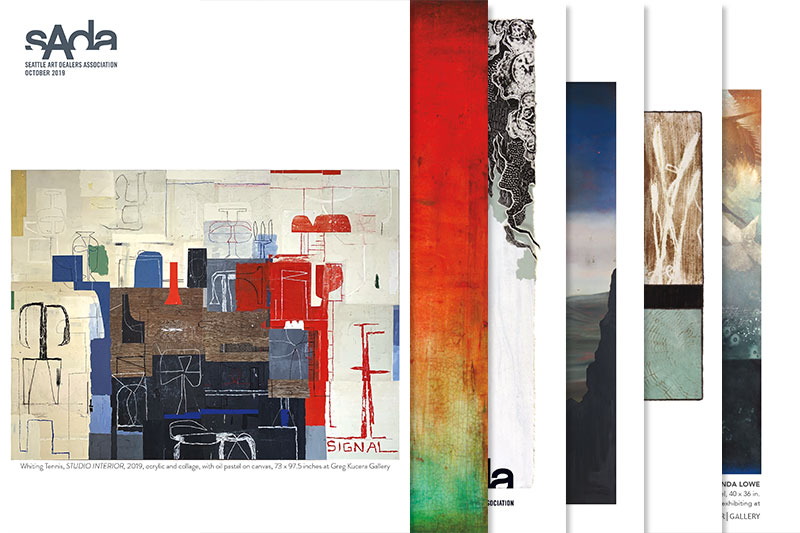 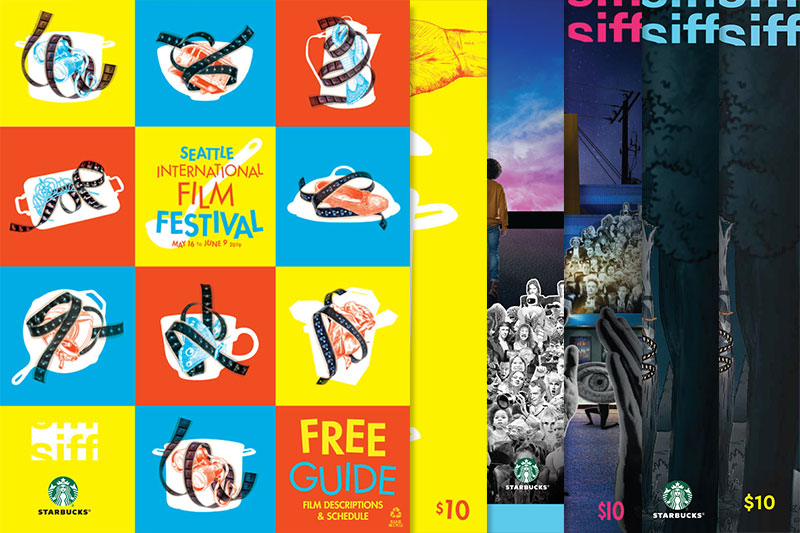 Seattle International Film Festival (SIFF) takes place in late May to early June each year and is the largest film festival in North America. Engage patrons through the widely distributed Guide and Catalog. 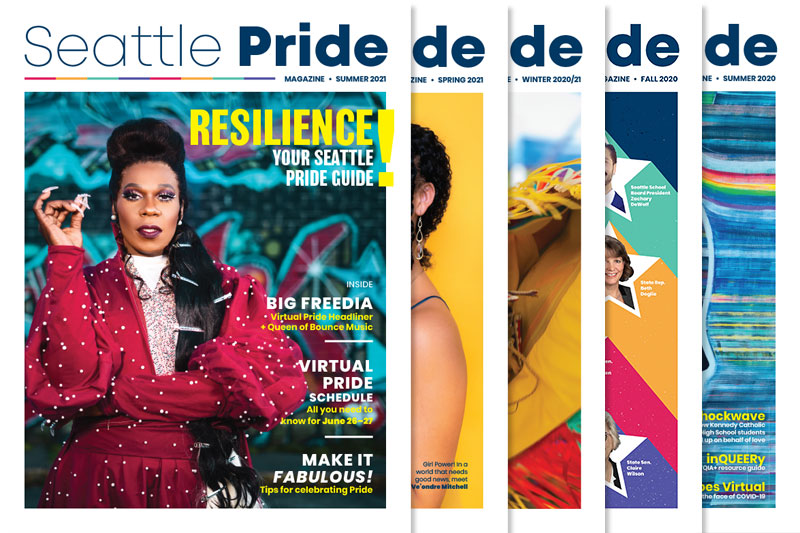 Encore Spotlight is the digital hub for performing arts in the Greater Seattle Area and San Francisco Bay Area. Created as an extension of our flagship product, Encore arts programs, Encore Spotlight provides a platform for curious audiences to engage with the local arts. Encore Spotlight offers compelling content that highlights performances and artists, access to digital Encore programs, and an intuitive calendar for local events.

Visit Encore Spotlight or contact us for more information.